Actually Seeing the Forest for the Trees

These days you'd be hard pressed to find an outdoor activity, or better yet an adventure, which doesn't burnish its enviro-friendly credentials. In my opinion the term "eco-tourism" has elevated itself into the ambiguous word arena, floating around with colleagues "natural" and "sustainable" in a quest to mean everything and nothing at the same time.

The examples are endless. Somehow if I just snorkel or scuba dive this reef it will never be blown to bits, or gutted by cyanide for Napolean wrasse lips. A simple kayak paddle through an estuary can prevent the locale from becoming a shrimp farm. By staying at a place with a laundry-list of green initiatives (including the standard-bearer of keeping those towels hung up if their clean) I can feel better about where I rest my head. The hotel might have chopped down swaths of vegetation, compounded the erosion problem, dinged turtle habitat, and contributed a hefty load of sediment to nearby marine environments, but you can get organic guava juice so even-stevens. I could Badu out and go on and on to the break of dawn, but I think you get the point.

Standing 25m (82ft) above the forest floor and looking east out into the tropical jungle of southern Costa Rica it was refreshing to be somewhere actually combining tourism, environmental activism and genuine passion. Glancing at the calm, azure-colored Caribbean beyond the trees I reveled in meeting someone that frankly cut through all the bullshit. And I mean cut through it well, full on with a scalpel.

Peter Garcar is the one wielding the BS blade. An engineer, tree expert and natural history aficionado, the Slovakian-born Garcar has been living in and around Manzanillo, Costa Rica with his wife and kid for some time now.

The elevated jungle platform (it seems like a diss to tag it with the typical treehouse label) has been operational for about five years, if my memory is correct. We visited around Thanksgiving of last year (2014) so I might get a few small details confused.

Moving on. Like I said earlier the Nature Observatorio is located 25m (82ft) up in the jungle canopy. Let's put the eco-tourism aspect of this endeavor aside for a minute and marvel at this just from an engineering standpoint. The structure is two floors, complete with a kitchen, shower, working bathroom (it's a composting toilet over 80ft in the air! Tom Wuebbens did I just blow your mind?), bean bag chairs in the lounge areas, hammocks and two beds equipped with mosquito nets. It's open 360 degrees around to the jungle, collects rain water and utilizes solar power. The true kicker: not one nail or screw is preventing this structure from falling to the ground! Take that Pete Nelson and Animal Planet.
The whole shebang is suspended on nylon straps and assembled like a "Lego" project, according to their website. But Peter had a way more rad explanation for it when we went out with him last November. He got the idea to go the suspension route from a bird: the Montezuma Oropendola (Psarocolius montezuma). This purdy birdy, which our CR crew consistently saw along the Carribbean coast, uses vines to sew together an intricate hanging nest, which in turn is grouped with other nests in big ol' stand-alone trees.

The pendulums dangle from the far end of branches, preventing monkeys from getting their grubby paws on an egg-cellent meal (I couldn't help myself). And just to show off even more how bad-ass these birds are they also choose trees that house hornets. Luckily for us Peter's inspiration didn't go so far as to include this last fact.

On our drive back from visiting the observatory the first time he showed us a cluster of these nests above the road. The zoom on my camera wasn't up-to-snuff so here's some Google images instead. The nests looked massive compared to the chintzy branches they were attached to. Peter is definitely a guy who doesn't lack enthusiasm, but you could easily tell he was stoked to show us the Oropendola's creation after visiting his. I marveled at the sight above, just like I did hours earlier in the jungle when I saw the observatory for the first time.

Now back to my critique of this whole "eco-tourism" thing. This ubiquitous label has branched off from the thinking in the mid-2000s that we could spend stacks of cash, keep consuming whatever we want and somehow we'd be alright when it came to climate change, resource depletion, etc etc. You know you are an incredible journalism dork when you can remember a NY Times article from over six years ago touching on this issue.

On our adventure Alli and I traveled to a few countries in S.E. and mainland Asia, plus Costa Rica, and almost every outdoor activity is brandished as "eco-tourism." But in reality few are going the extra mile and actually making a difference. I don't want to spend the rest of this post griping about the outfits that are a sham, but I do obviously wanna applaud Nature Observatorio. I'd say they're on a hover board, hundreds of miles ahead, while the slew of others are trying to figure out how to get you that fresh guava juice on your kayak tour.

To understand why this was one of the coolest things I've ever done and actual eco-tourism then I guess I have some explaining to do. Peter's got the entire picture down pat. You hike into the jungle while he leads the way, explains the project, waxes on about how vital emergent trees are, points out poison dart frogs, delves into jungle ecology, and drops facts about how knowledgeable the local indigenous Ticos and Panamanians are (and how he's learned so much from working with them).

Next, you walk up to the observatorio. It's quite the sight at first. I think it goes against human nature to actually think a structure can work like that without screws or nails. We then got a lesson in tree climbing, which definitely differs from rock climbing. Alli, Noah, Crystal and I had never done any tree climbing before, especially the kind that takes you over 80ft in the air. To get your tush to the top you push up with your legs from a classic squatting position, while at the same time moving the rope higher and higher. Along the way you'll take a few breaks to stare at the canopy and eventually you'll arrive, shiny with sweat and panting like all folks with European ancestries do in tropical environments.
Peter gave us a meticulous run-down on everything, from the building timeline to the art of tree climbing (they monitor over 50-80 trees in the reserve area); info about the inquisitive mammals that show up at night (I had never even heard of olingos before) to the reality that people don't really know much about what goes on in canopy ecosystems, just like other scientific deserts, such as the deep, open ocean or wintertime Gila monster dens.

The afternoon wore on, but the coolness factor never deteriorated. We kept chit-chatting and finally after some prodding by Noah Sir, Peter finally let his opinions out and this is where it all ties together. This is the meat of what I've been trying to say. Peter talked about deforestation and how all over the world, even in Costa Rica (probably the most eco-tourism-centric country ever), trees are falling in drastic numbers.

The simple reason: they're worth more dead than alive. People value trees more when they don't exist any longer in the wild because they give us wood products, beef, bananas, copious things from palm oil, like processed food and cosmetics (which come from monoculture plantations that have replaced forest; I ramble about that here), and so on and so on. Peter knows this, but doesn't believe it. He, his wife and their colleagues are using this tree and all the others to fight that notion. His goal is to show that a living tree does have value and he's set up one hell of way to get that point across. 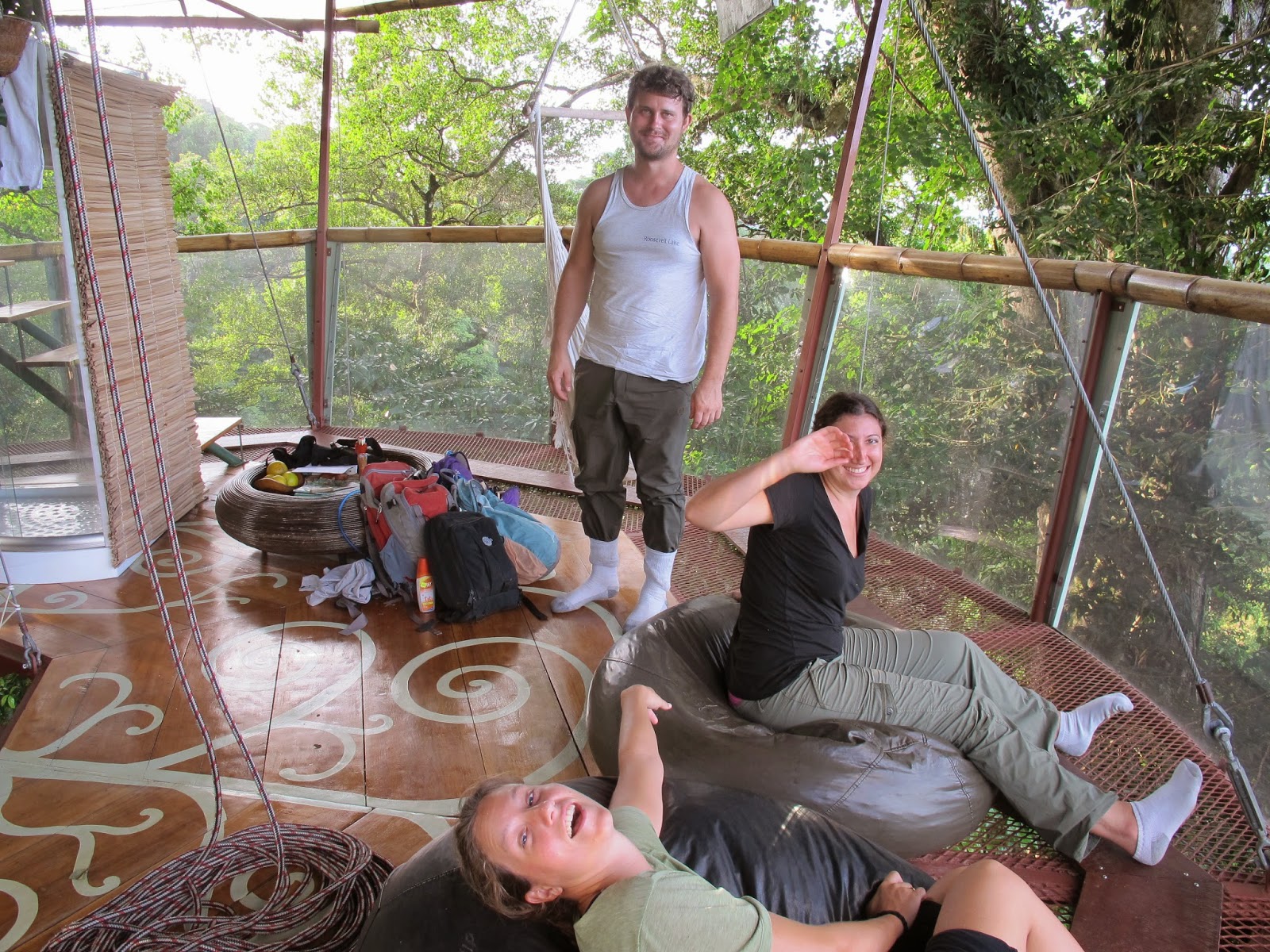 So he's firing on all cylinders. Or to revisit my knife analogy, stabbing with all motions I guess? Nature Observatorio is protecting land for future generations; studying it; asking and answering important scientific questions; educating folks about the importance of biodiversity; hiring local people; and using innovative designs and ideas to utilize tourism while not harming their natural resources (e.g. the trees); basically being an original trail-blazer in a sea full of mediocrity.

Surprise: the four of us geeked out over this place. Big time. We went for the day, but dug it so much that we returned for another session to stay the night. What more can I say? It was beyond glorious. We played dominoes and drank wine while the jungle got its noise on all around us. We went to sleep and then awoke in the middle of the night to a downpour, which was refreshing and thrilling to be in since trees do sway in the wind. I thought about how if Oropendola nests can weather a storm then so can we.

We all woke up in the morning and began a mission to find as many birds as possible. The effort paid off: two species of toucans (Chestnut-mandibled and Keel-billed), noisy Red-lored parrots, and one rare King vulture, with its telling white wings and technicolored-skin face. We relaxed, taking in a morning that most likely for me will never happen again. Or at least not for awhile. Peter has plans to take this idea to forests throughout the world, and expand upon his one observatory and in the CR. Hopefully his vision can take off, as this is one endeavor worth a franchise.

Peter finally called on us and climbed up. We joked about the storm and got excited when he said a Harpy eagle nested in a tree over yonder last year. We talked some more about all those weighty issues I've discussed above, from deforestation on a global scale to the nasty environmental track record Costa Rican banana plantations have. You know, the usual depressing stuff that arises when the words conservation, biodiversity and endangered get tossed about.

But Peter's optimism shined through, especially when discussing the future of tall trees, like the one we were sitting in. I smiled and thought of a quote from a friend that comes to mind often: "there is so much to get mad about in this world." So sometimes you gotta enjoy it while you can and applaud those that are channeling that anger into something productive. While the four of us continued to enjoy our Thanksgiving morning in the tree, Peter brought out fresh guava juice. Like I said, he's got this whole eco-tourism thing down pat.


More photos of the entire experience can be found below.
Climbing the Tree (photos taken from two different ascents): 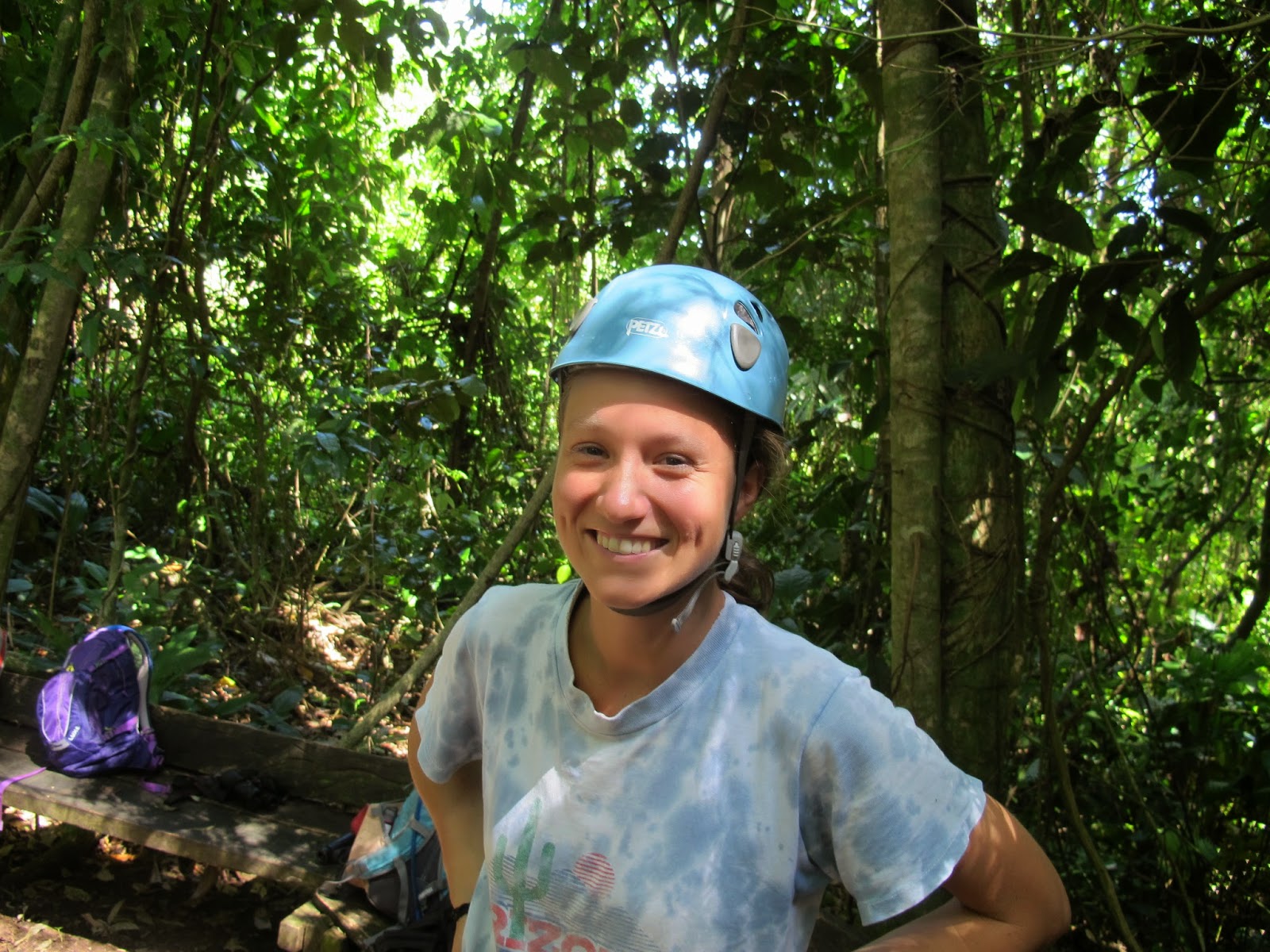 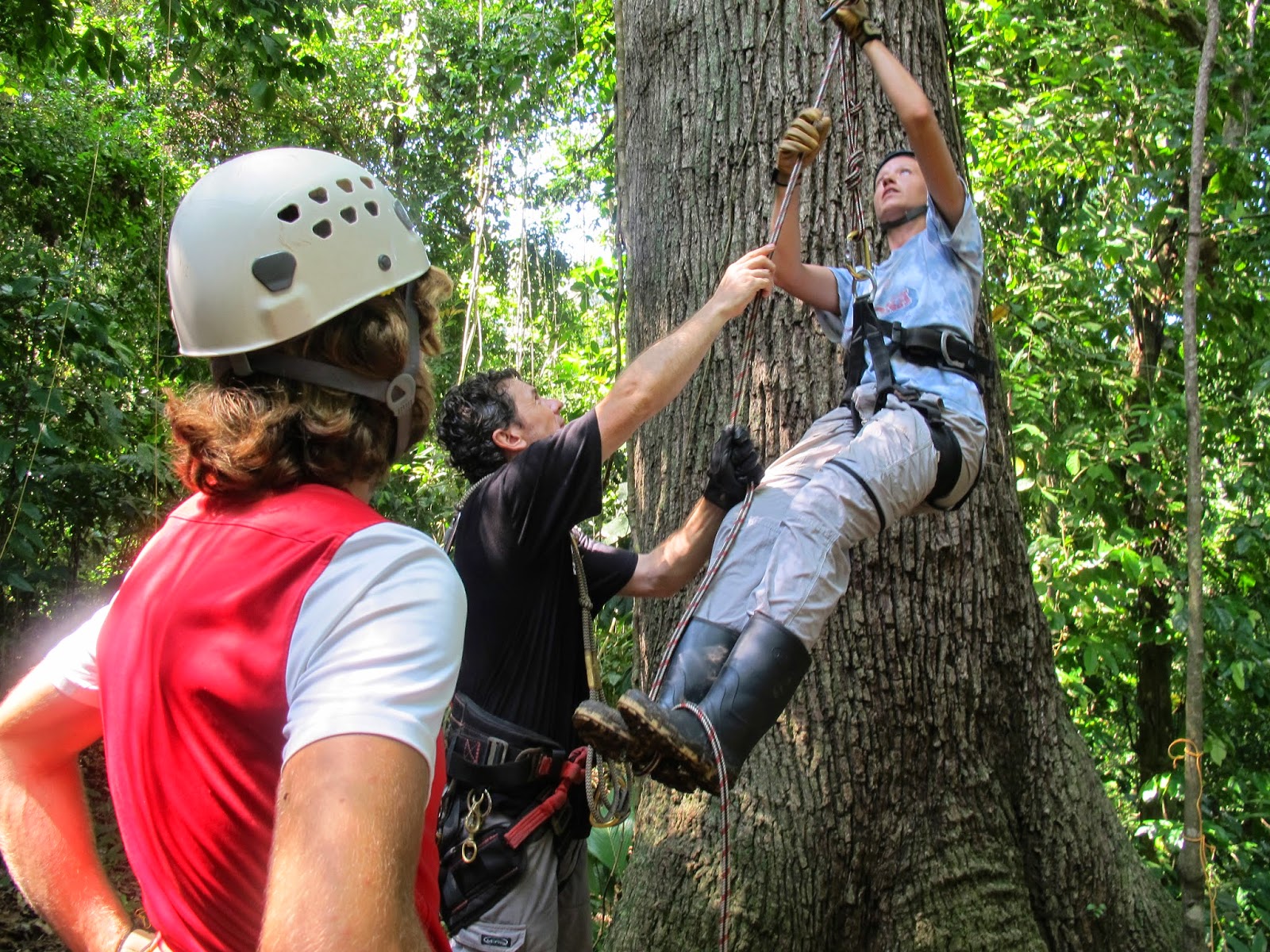 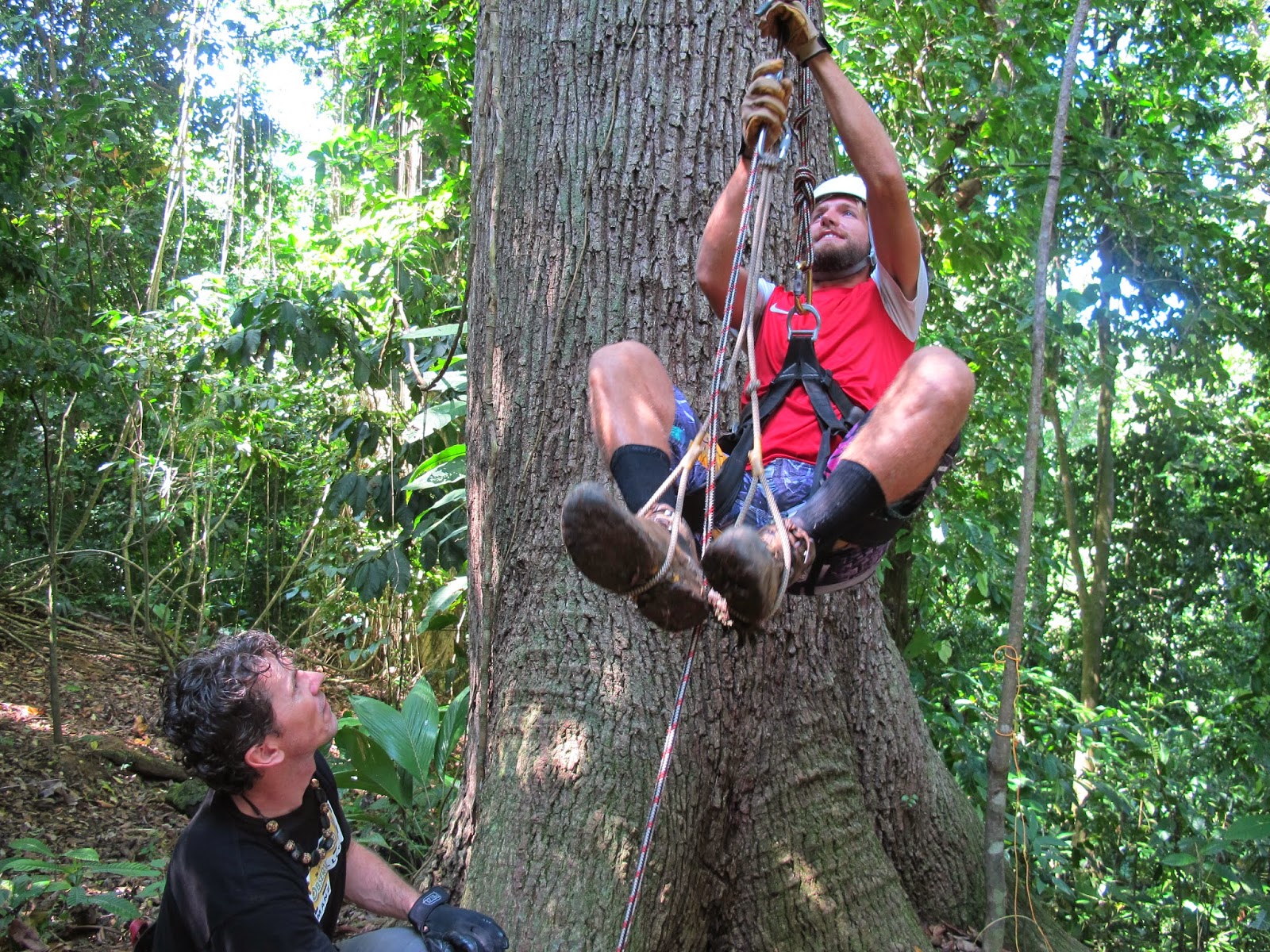 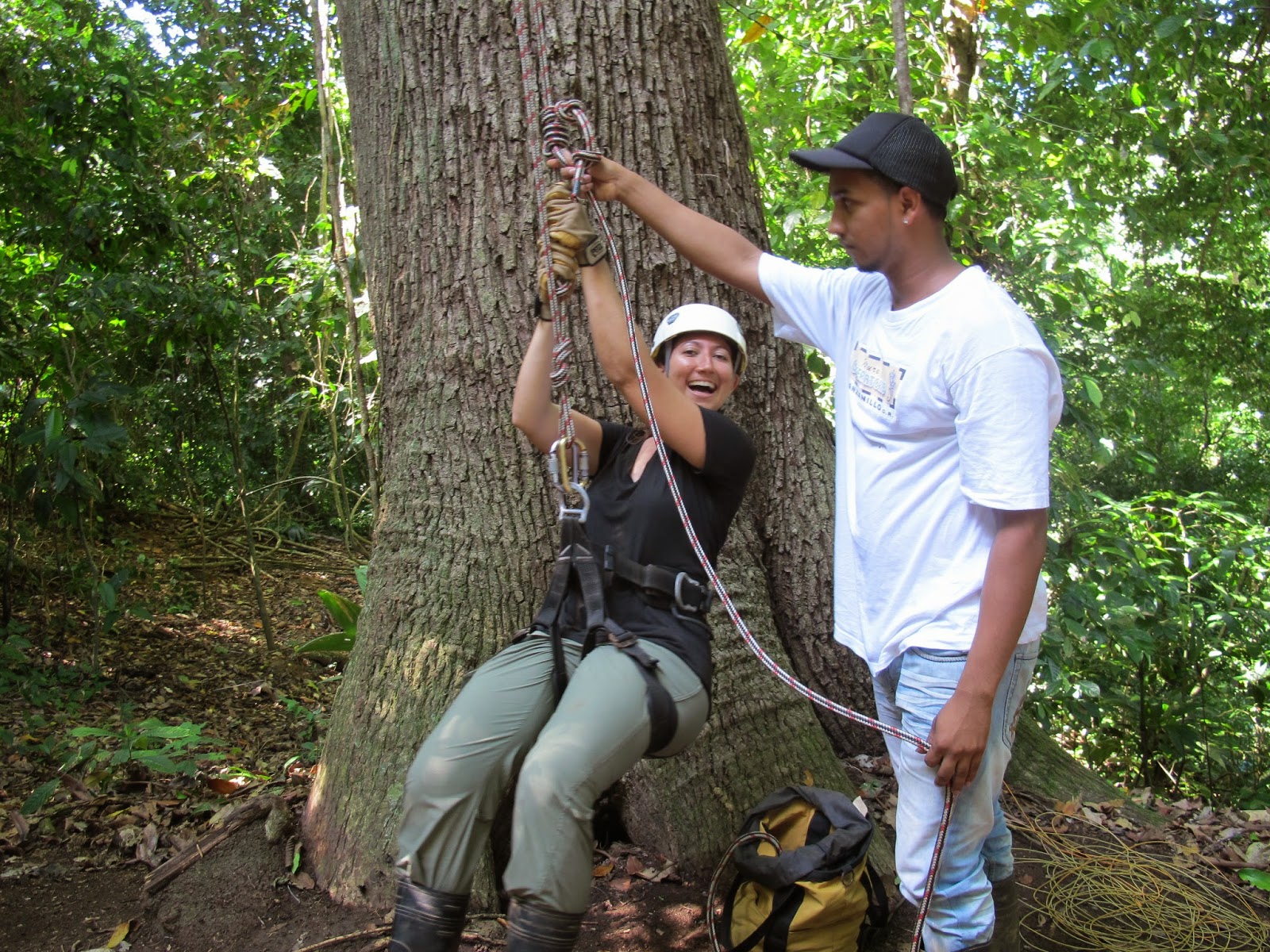 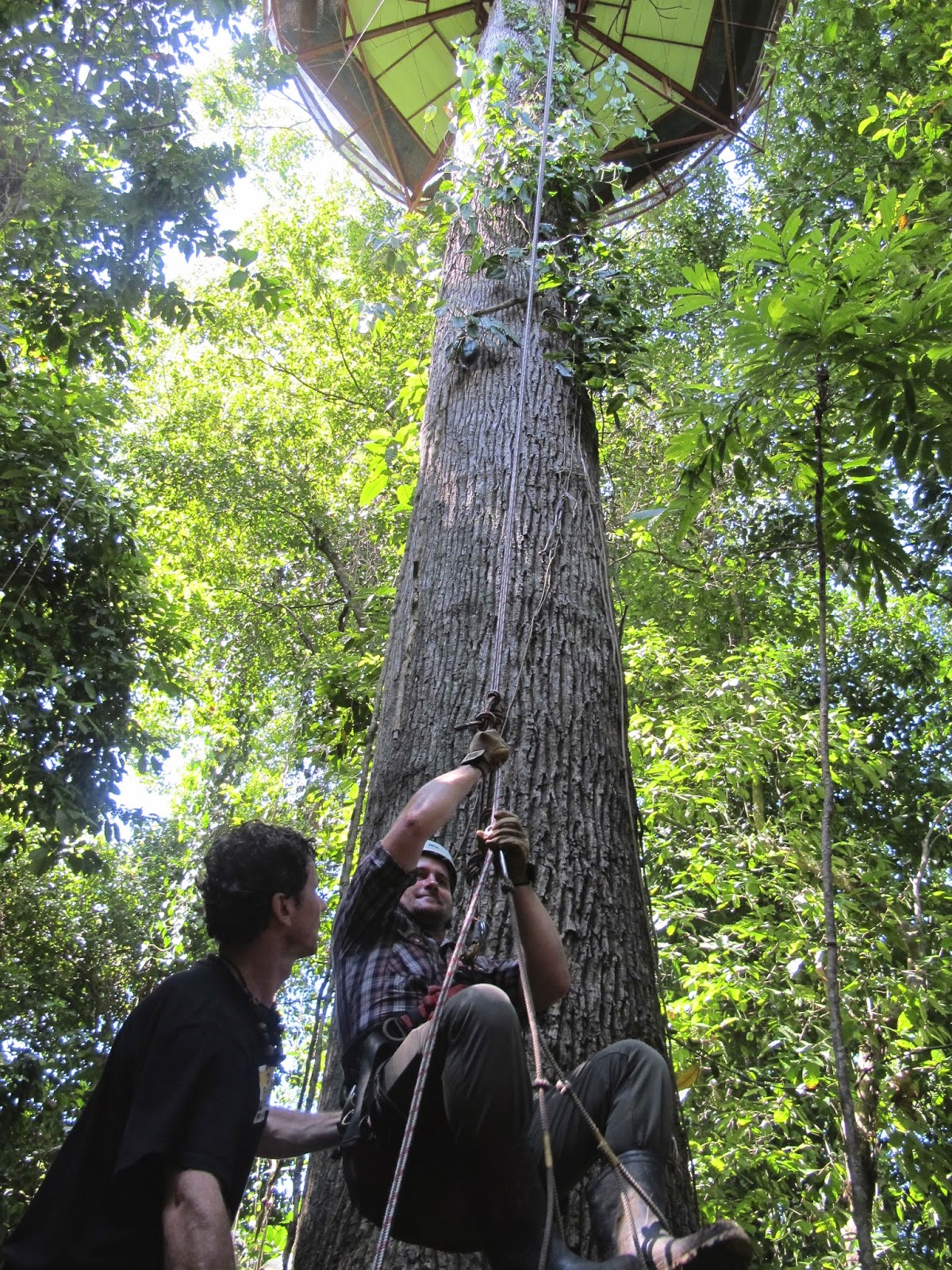 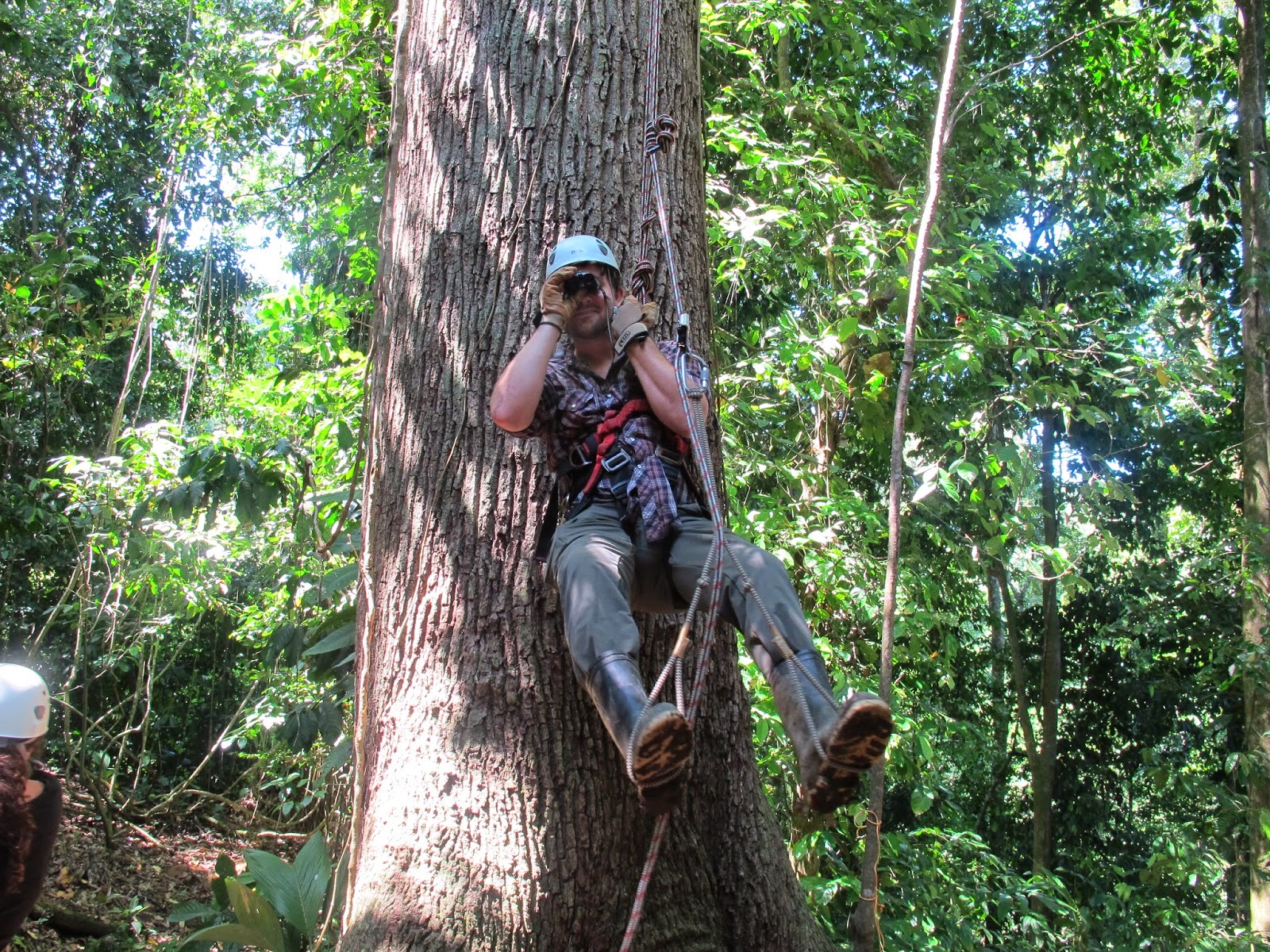 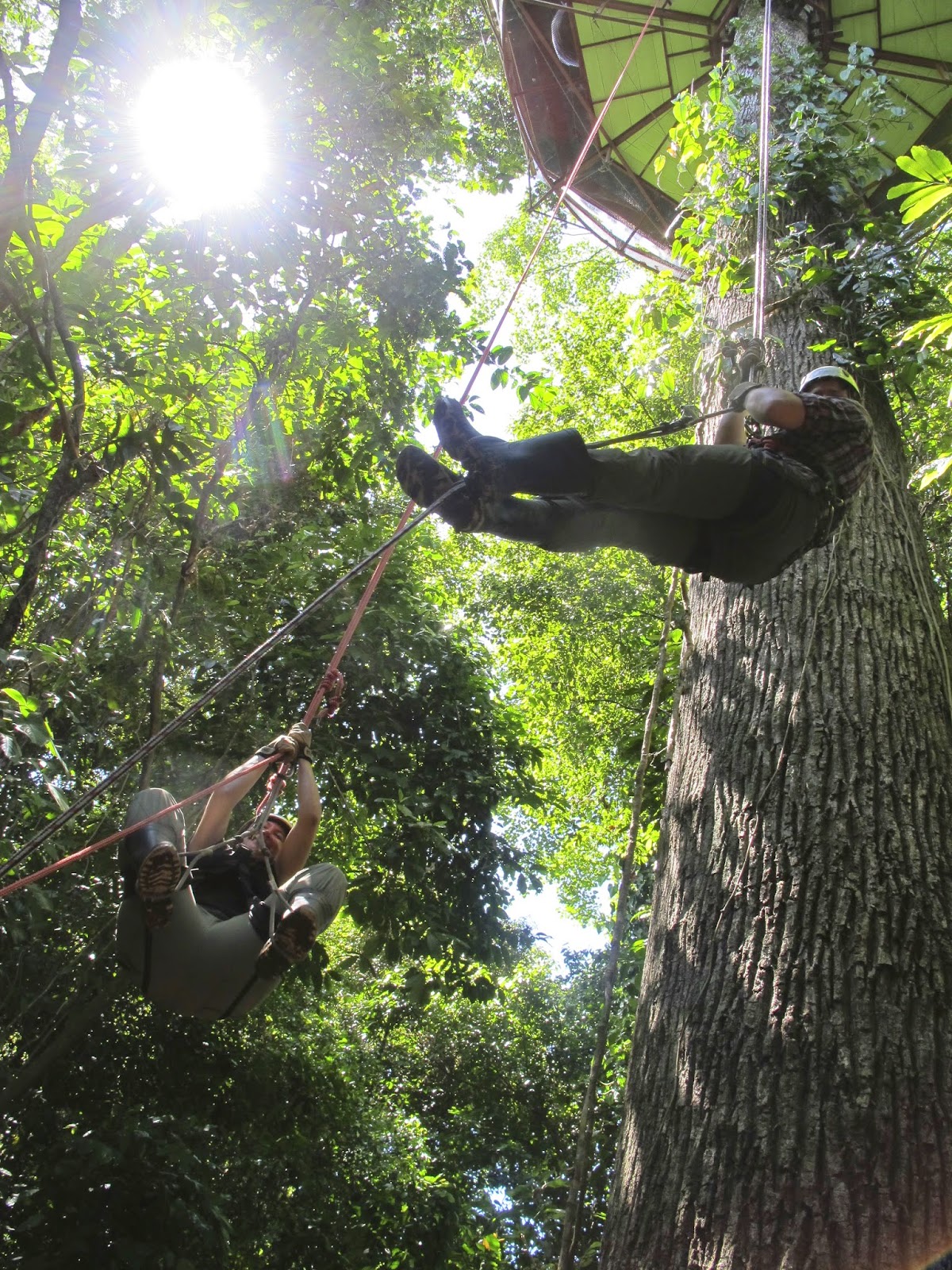 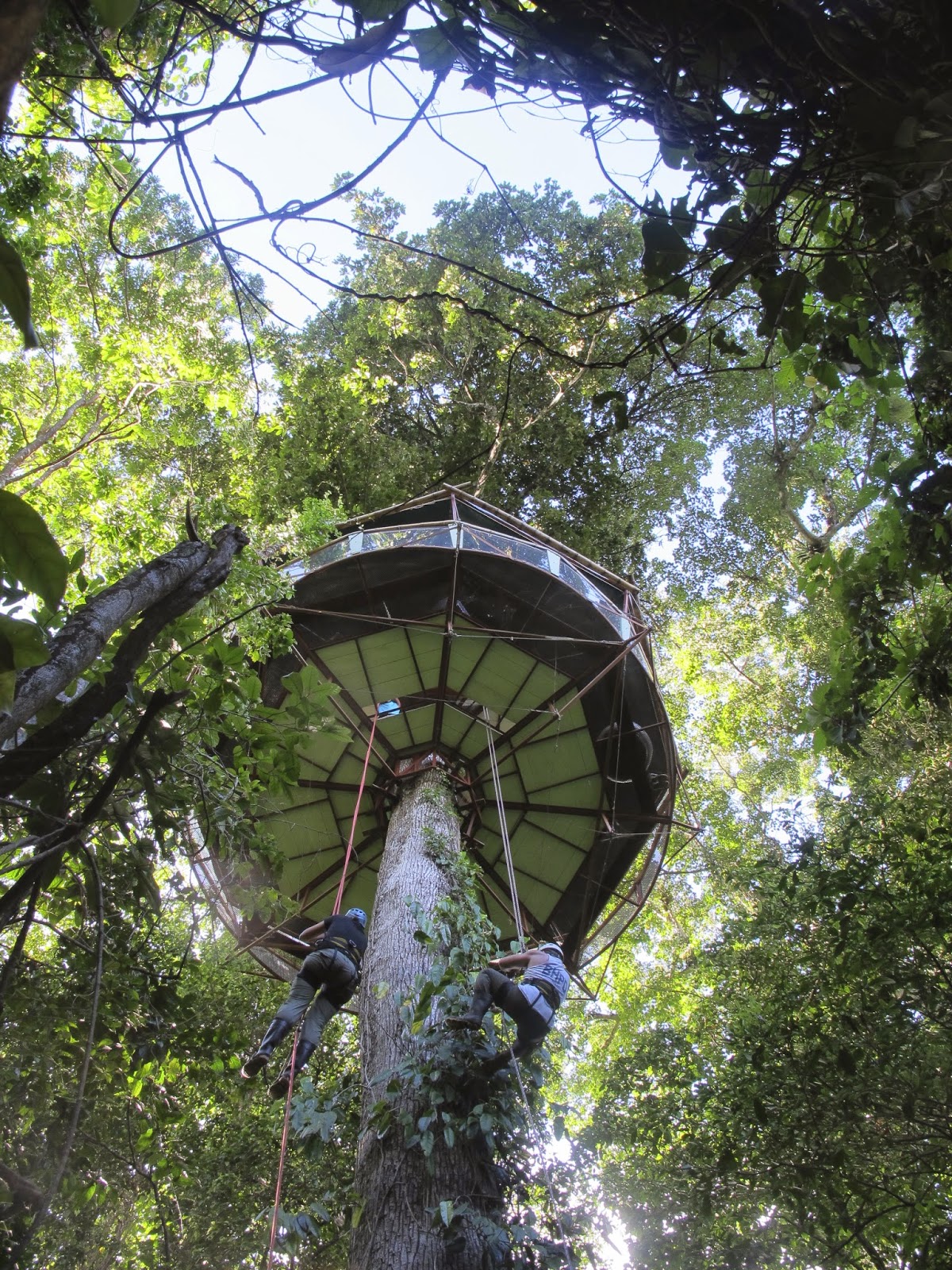 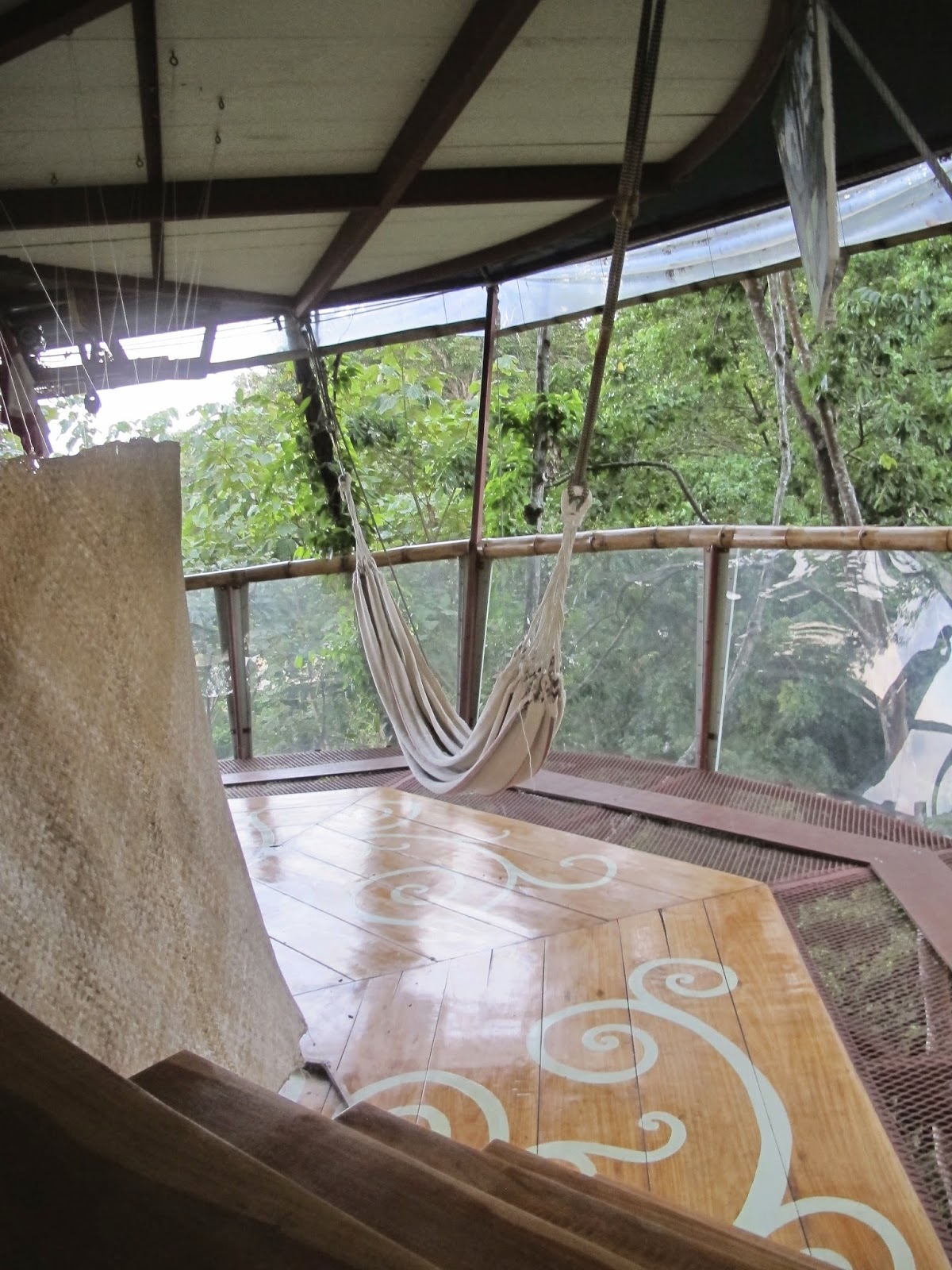 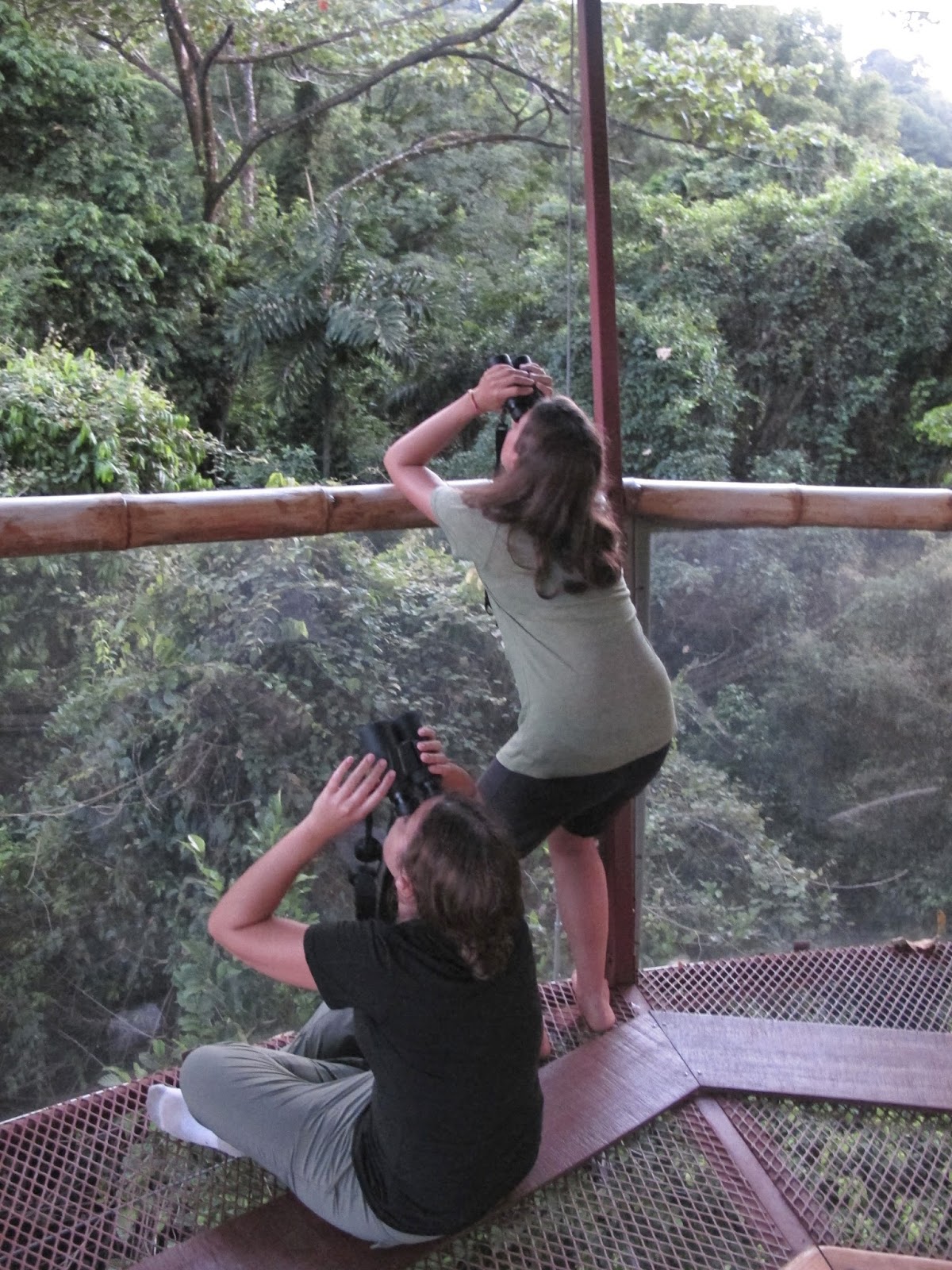 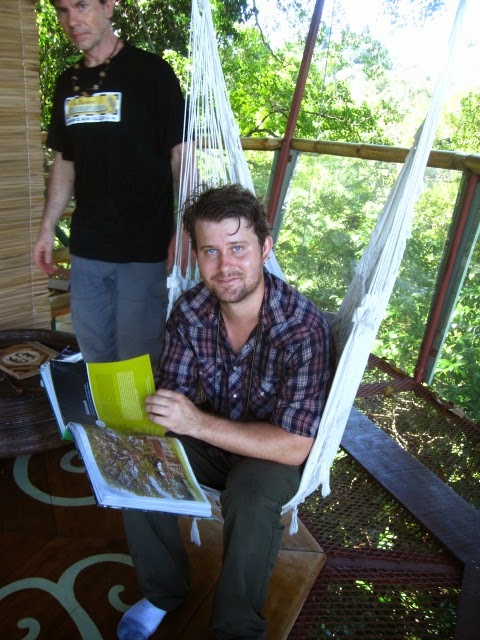 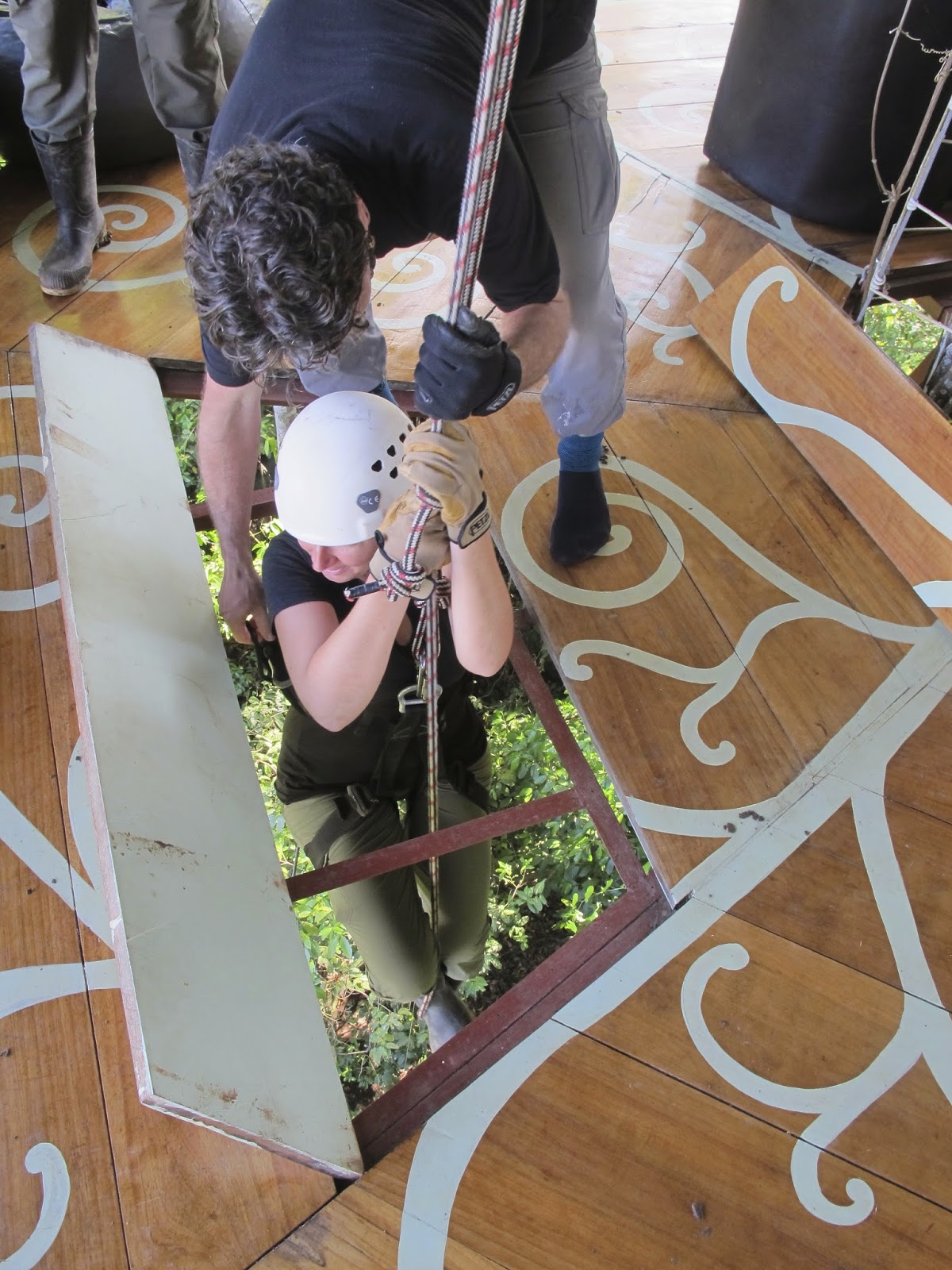 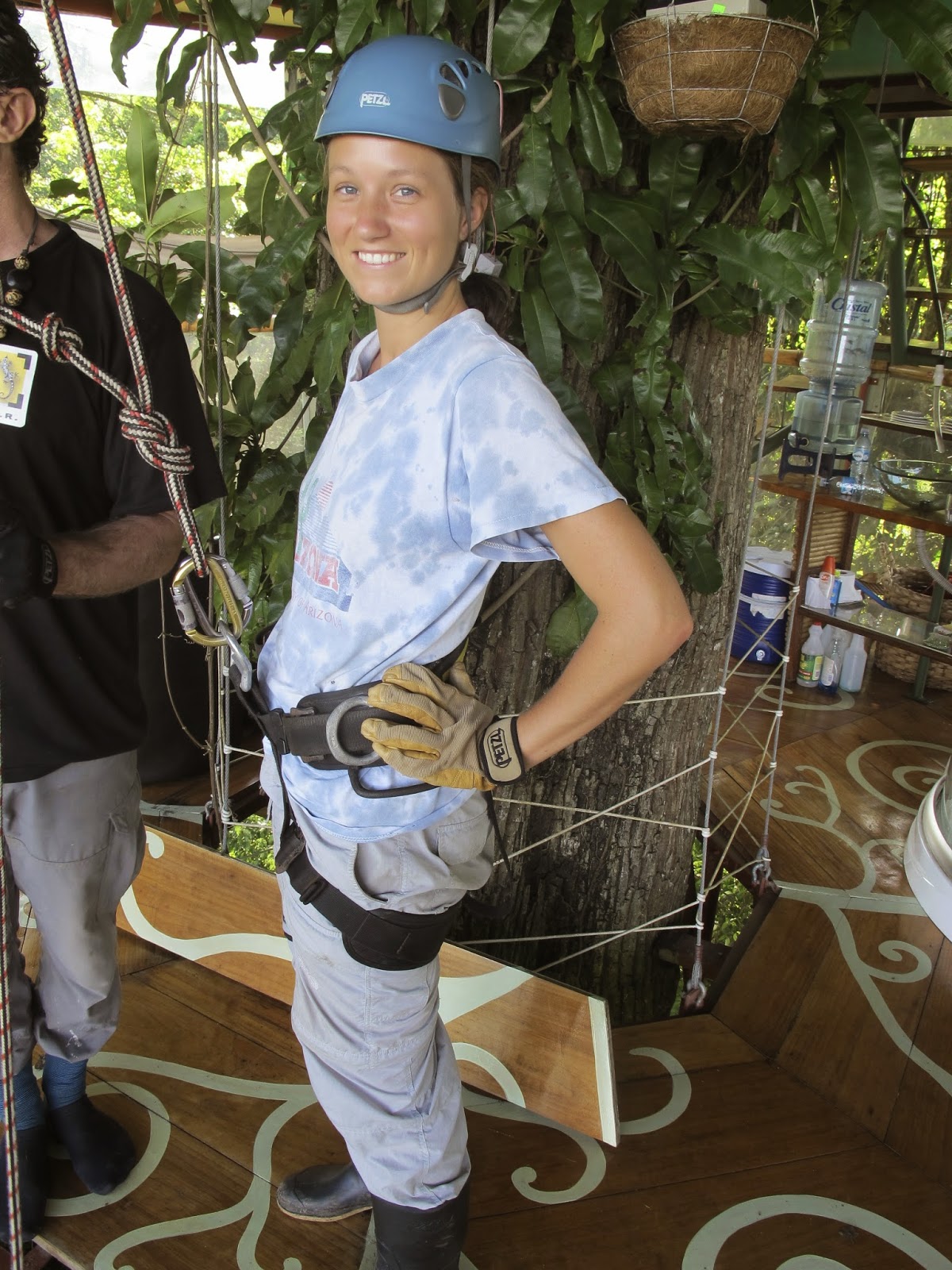 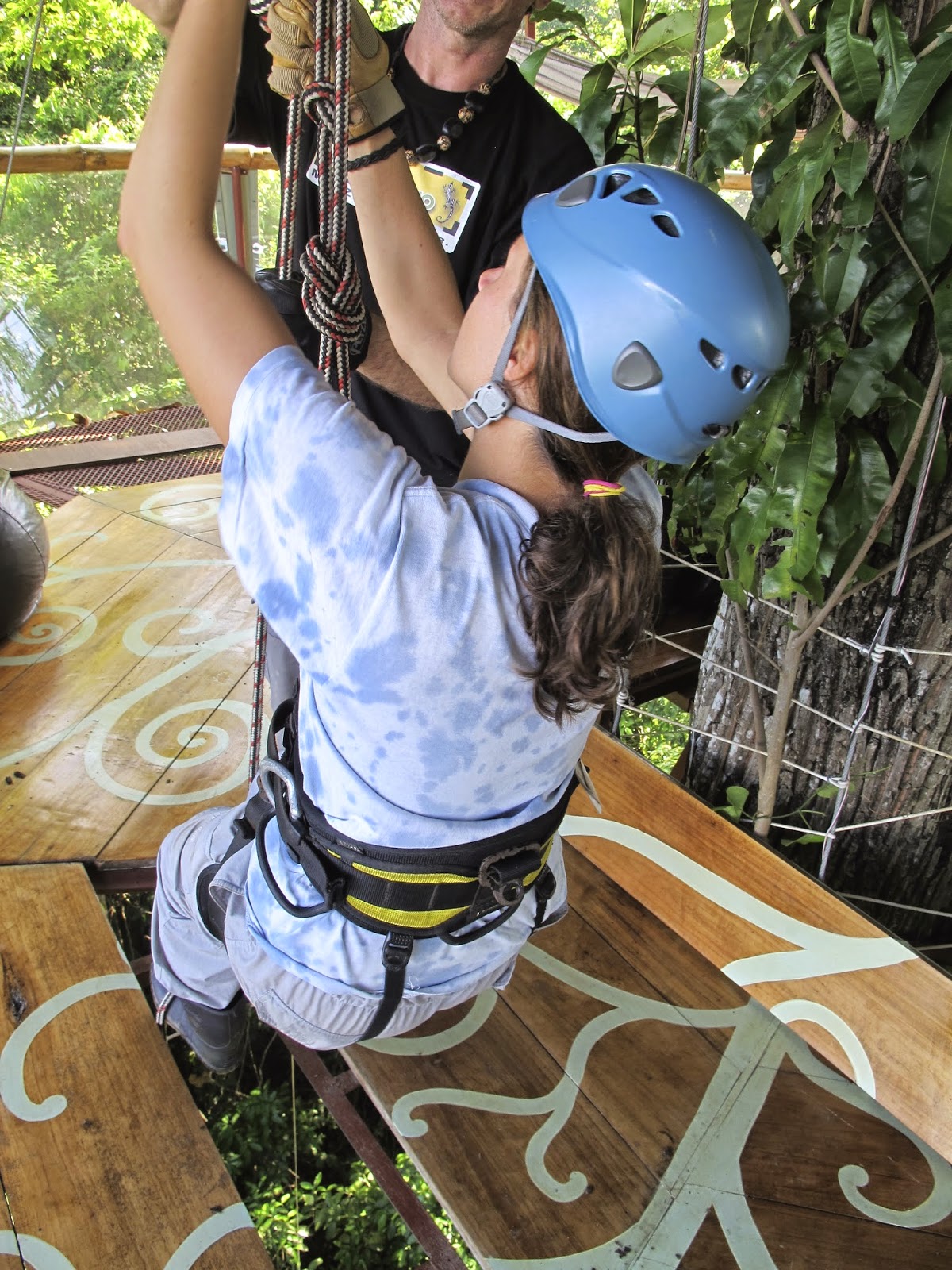 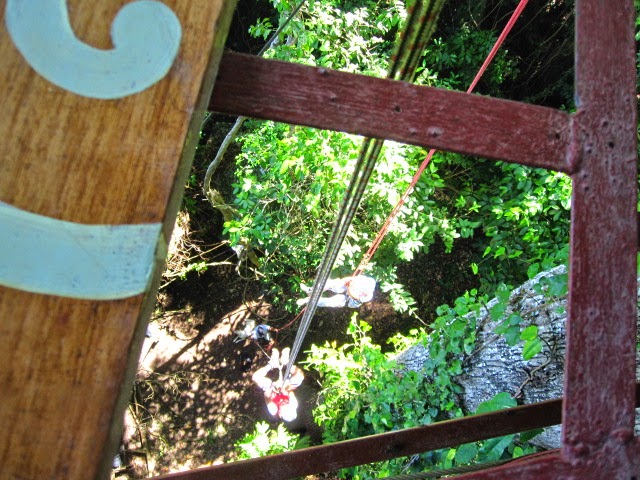 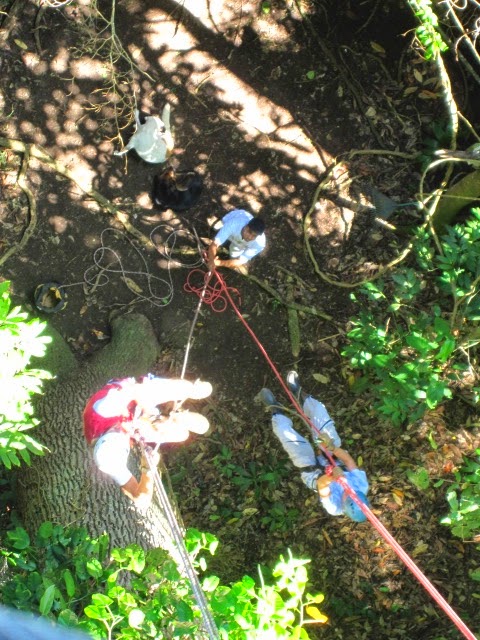 The Treks In and Out: 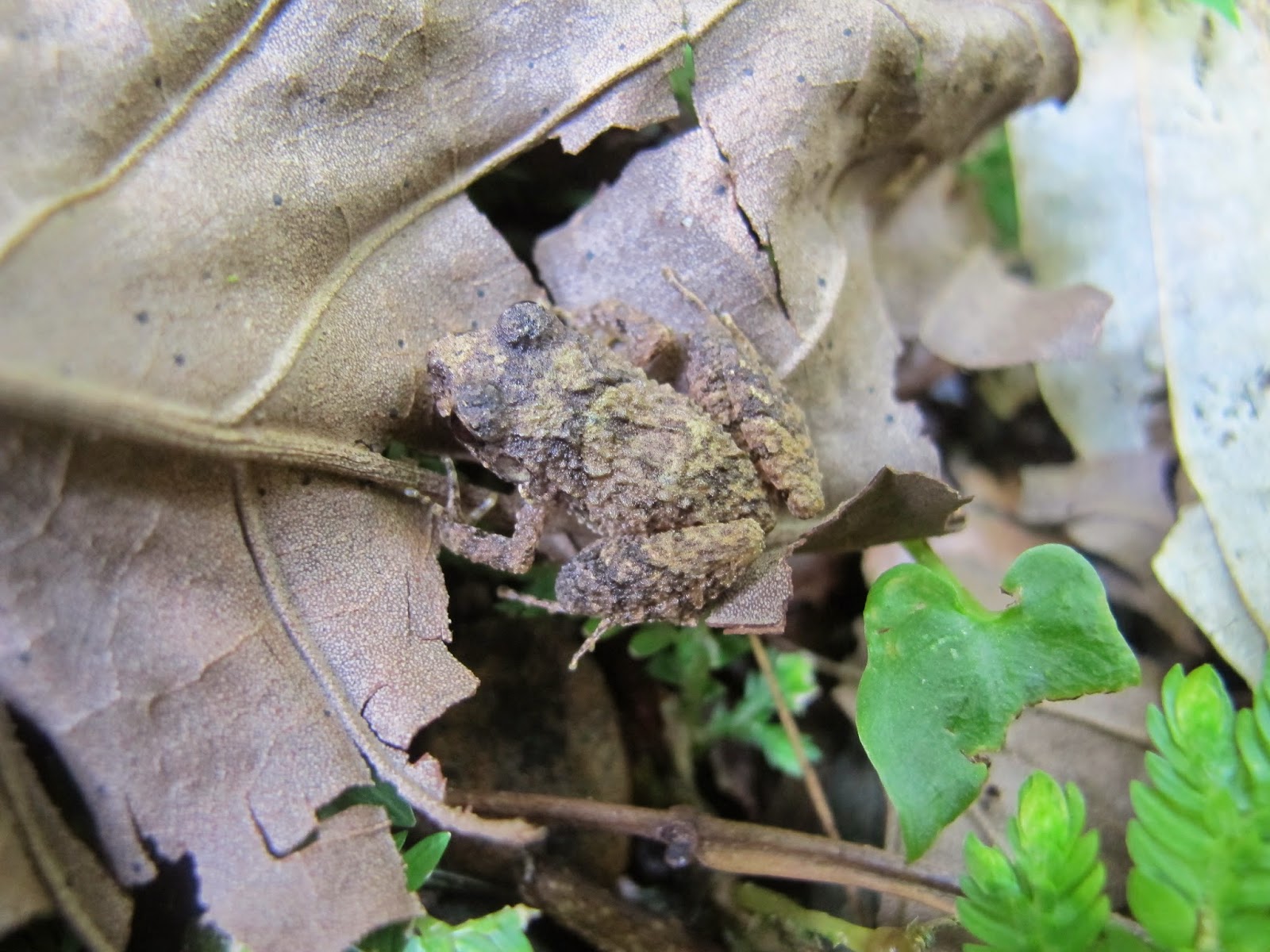 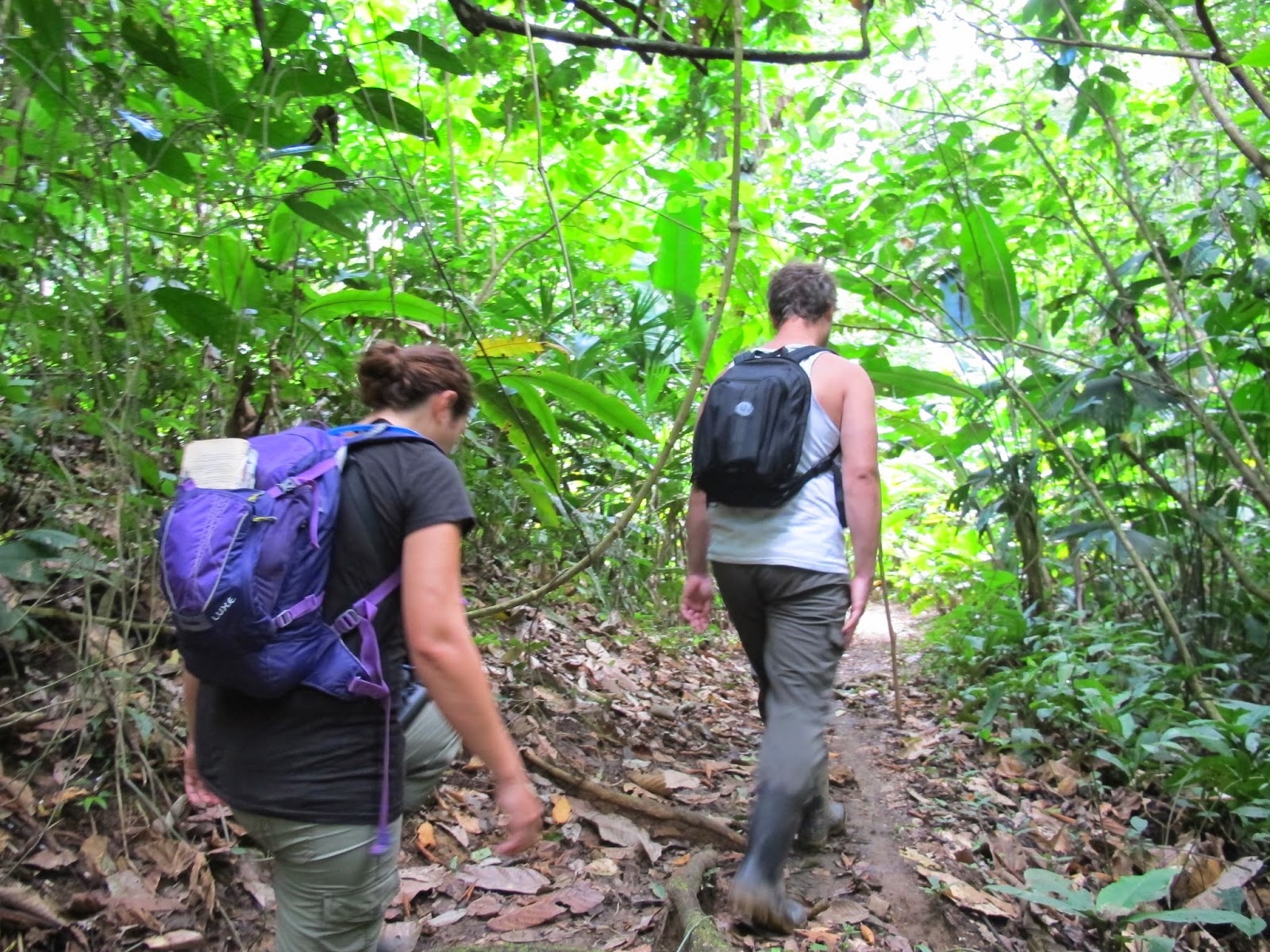 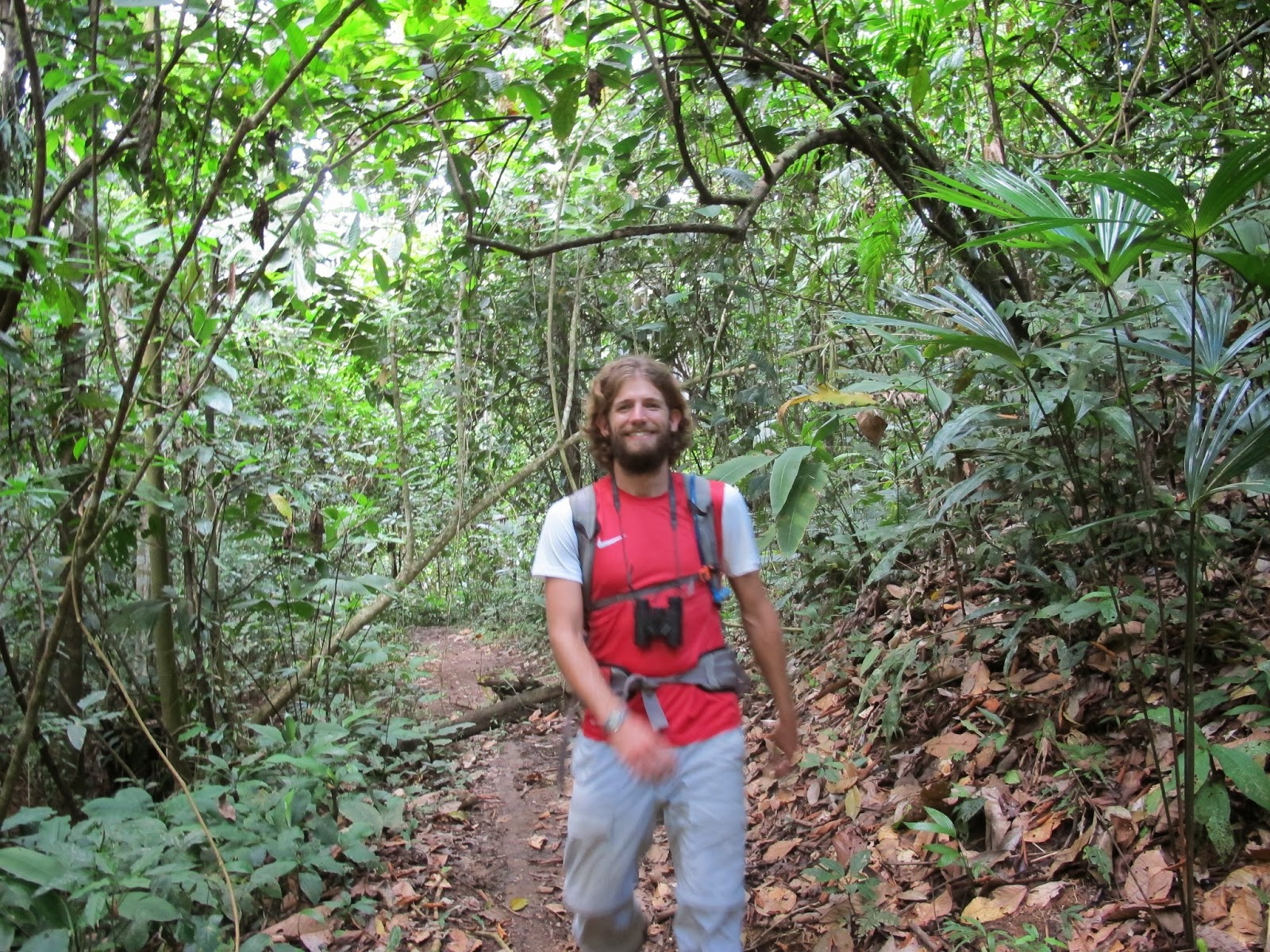 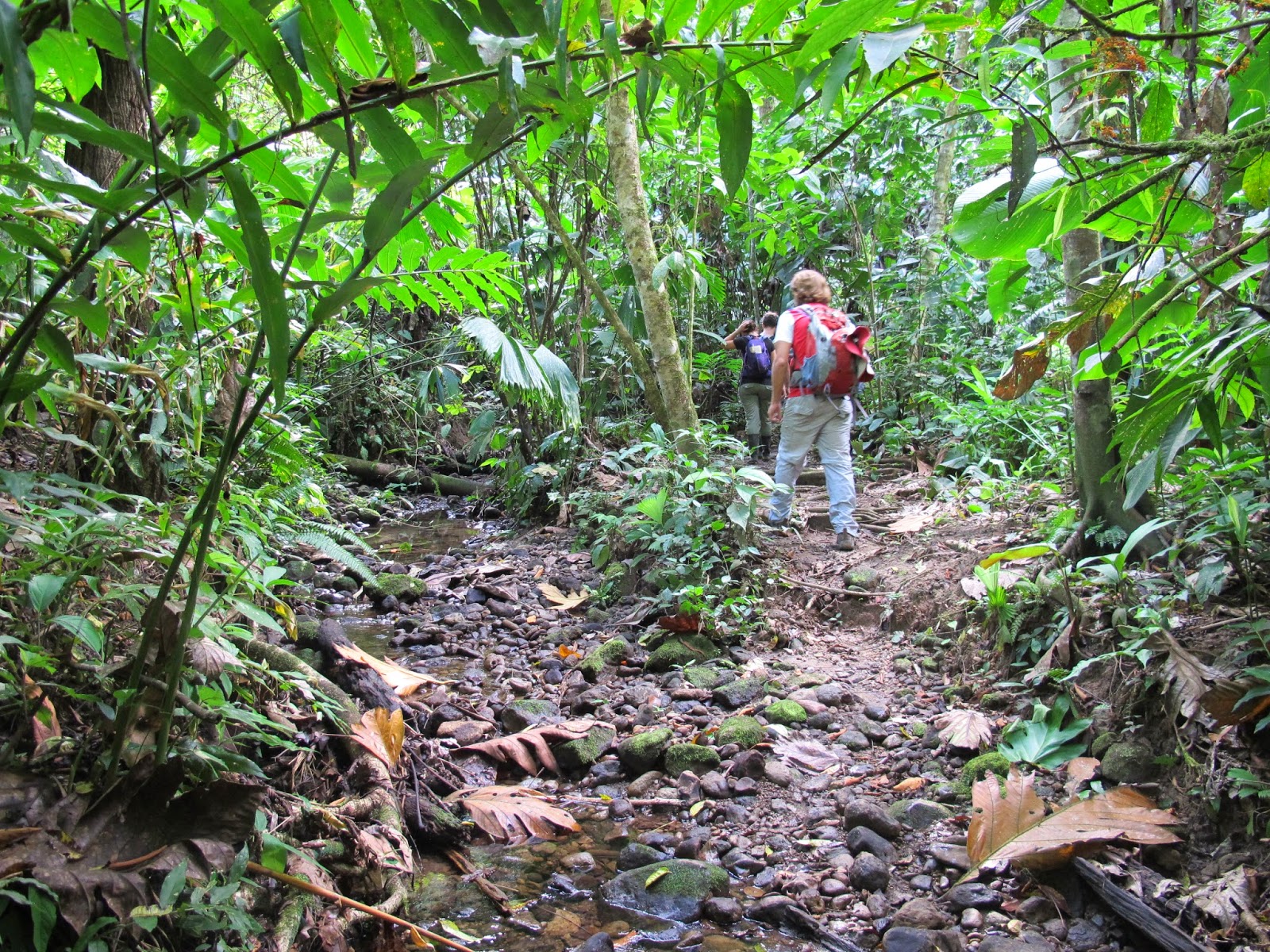 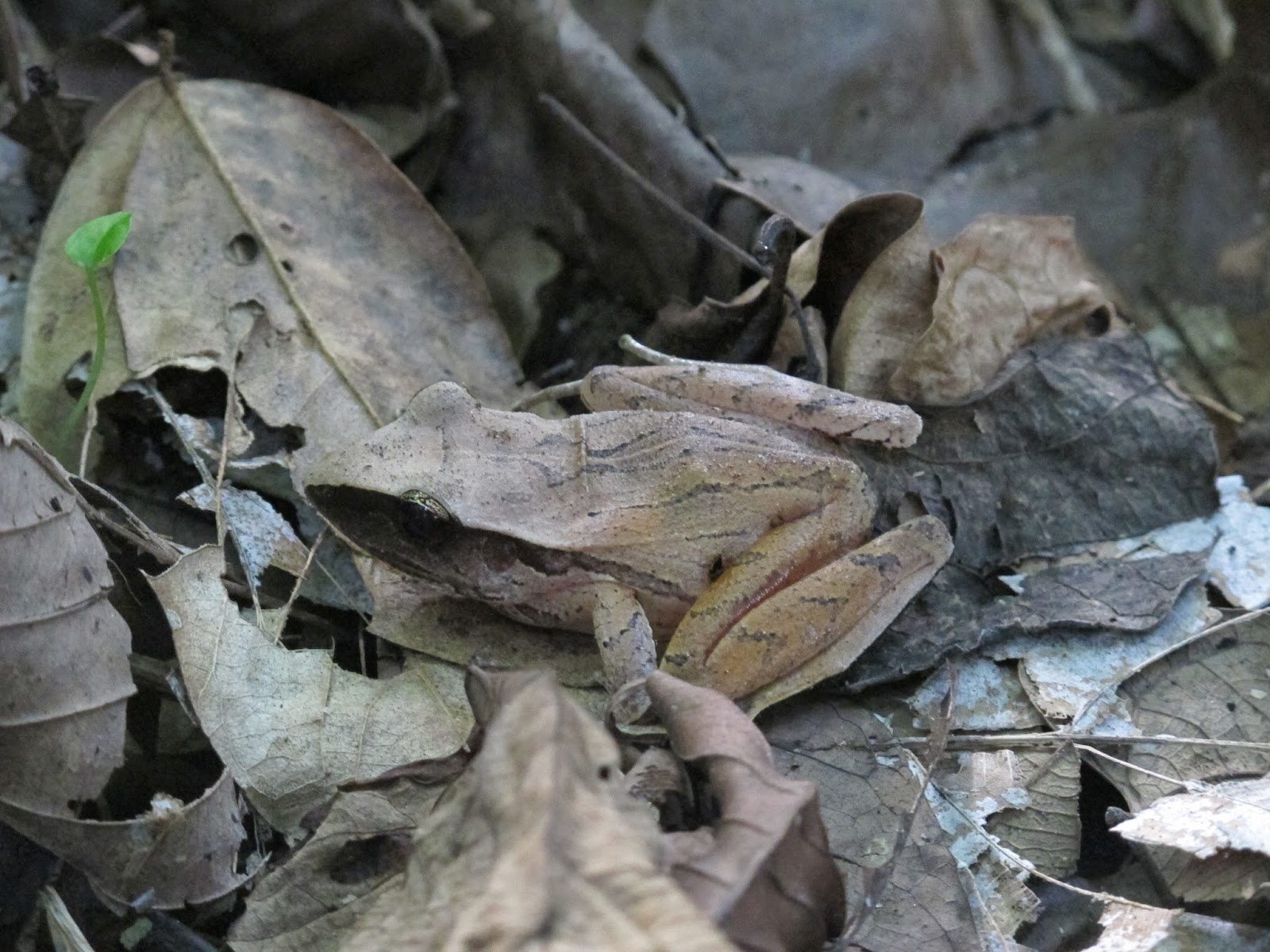 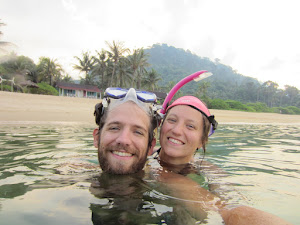 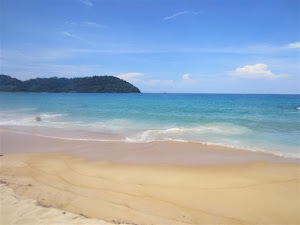